The Announcement of the Death of Windows Mobile 6.5 is Premature

This year for TechEd, I created a Windows Mobile 6.5 widget to allow attendees to manage their schedule.  After noticing on the third day that there seemed to be a constant stream of downloads, I added some server side instrumentation to detect user agent strings and record what types of devices were downloading the data.  Although this was a Microsoft event I was still somewhat surprised with the results. 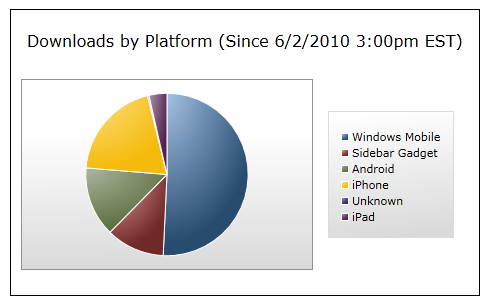 Although this was a Microsoft conference, I was surprised that even though the application was available on all of the major platforms, Windows Mobile 6.5 was the most used platform for this application by a wide margin.  I was also very happy to see so many people picking up the application from Marketplace even before I started publicizing and the link was added to the TechEd web site.  If you are under the perception that no one is using Windows Mobile in its current version anymore, you might want to reconsider.  There are a number of great Windows Mobile 6.5 devices out there and apparently there is a silent, yet fairly large number of users that still use these devices, including yours truly.