in Las Vegas.  On the way to their house I received an email asking me if I wanted to compete in the Windows Mobile Train Race over the weekend.  Not really sure what this meant, I said sure, it sounded like a great

opportunity.  Little did I know how great of an opportunity this was.  As I received more details I learned that Microsoft Windows Phone and AT&T were going to fly eight developers to Seattle to hop on a train and build a Windows Mobile application on the way to PDC.  Thursday night I received the invite, Friday I was on a plane heading to Seattle.  One-word “Incredible”. 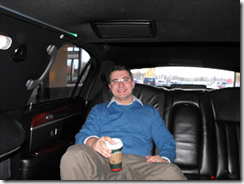 So Saturday morning after a limo ride to the station, we hopped on the Coast Starlight and headed from Seattle to Los Angles

not really knowing what to expect.  Before lunch we were given time to get familiar with the train and amenities.  Next we needed to break into teams of two, I was teamed up with partner in crime from Tampa Nikita Polyakov.  Sidebar – the two of us are putting on a Windows Phone Camp in early December, so please be sure to check it out.

Each of the four teams needed to come up with a concept for our application.  The theme behind the application was to build a “green” mobile application.  Our concept was to build a mobile application that will allow people to share and coordinate rides while attending events on the road.  The basic idea is if you are by yourself at a conference and need to catch a cab or need to schedule local transportation, chance are there are a number of other people attending that some conference that are heading to the same place.  Our application is intended to bring those people together through the use of a Windows Mobile application.  The idea being not only will this reduce the number of cabs on the road but also save the people using the app considerable money.  This was driven home as I was shelling out the $20 to cab drivers over the past two weeks.

After we came up with our rough idea, we were interviewed by the film crew on our idea.  They were shooting video of us developing the application.  Once the videos are published I’ll make sure the link gets published. 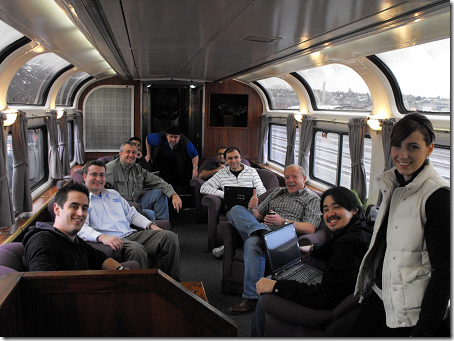 Next came application development time.  So Nikita and I started out on our tasks, he took the UI, I took the services layer.  We needed a services layer to coordinate registering and 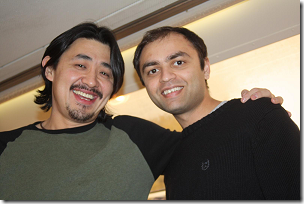 querying the different events.  We just implemented a simple ASMX set of services on top of LINQ to SQL for a SQL Express database.  We had internet connectivity thanks to my Sprint MiFi that I shared with the other teams.  With this connectivity I was able to RDP into a VM and was able to publish the services on the internet from the train.  This allowed us to use the application from our Windows Phones without any local software installed.

The goal of our interface was ultra simplicity.  Basically click through lists to get to the event you wanted to register for.  Once we get the application published, we’ll build up a web site describing it in more detail.

So we worked hard on our apps all afternoon (with a beer every now and then), then dinner came around at 5:30, we ate dinner and settled in for a few more hours of application development.  At approximately 7pm, the party started.  Little did we know or expect, but the primary activity for the night 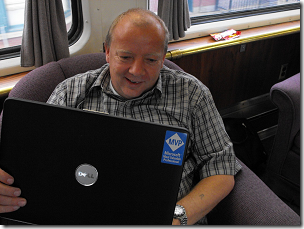 included playing games, we even had a little toaster oven where somewhat made smores.  To make this more realistic, someone put there laptop displaying a fireplace next to it.  Nice touch.  At about 8:30 I was growing restless, I was smack-dab in the middle of getting something to work so I just had to put in just a little more time doing coding.  At one point some people tried to drag me away from my computer and I probably sounded like an addict.

I just need to cut one more line of code and I’ll be done for the night.  Really I’m getting oh-so-close.  I can quit any time really.  Just leave me alone, one more line.

So I got my task completed and rejoined the party.  We played Mafia and Citizens.  I was a bit skeptical when I heard the instructions, but it turned out to be a fun game.  I drew a red  diamond so I was as part of the Mafia the first two rounds. 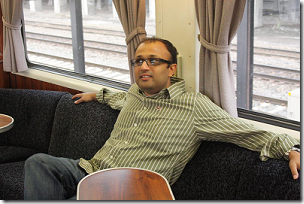 Earlier in the afternoon, we drank the lounge car out of Sam Adams so we were working on the rest of their bottled beer stash.  Oh, yeah our gracious hosts did an excellent job of 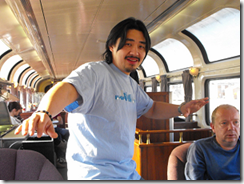 keeping a beer or two next to us most of the day Saturday.  I can’t say enough how well of a job they did to make this a great experience.  After finishing off the rest of the bottled beer, we broke into the “hard-stuff” 3 bottles of Grey Goose, and a 1/5th of Jonny Walker Black Label.  So about 2AM some of us wimps decided it was time to call it a night.  I crawled into my sleeping car after contributing my fair share to polishing off most of the pre-mentioned bottles of booze.

Sleeping wasn’t all that great that night.  I think I slept, but I’m not sure.  It was noisy, bumping, I was excited about the event, and had a bit too much alcohol.  At least I didn’t 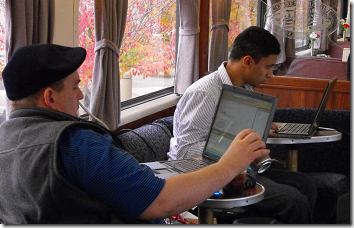 have any nightmares like Mel Sampat he revealed he dreamed about the train being derailed.  At about 6AM, I gave up grabbed my laptop and started working on the app.  Surprisingly I wasn’t all that tired or hung-over.  Good quality booze.

The next day we focused on our apps, and we made significant progress.  At approximately 2PM we had our first review.  Prior to that our application was working great.  About 30 minutes before the review I wanted to make it better by making some animations a little smoother.  Of course I broke the app and couldn’t find the bug prior to the review.  The app worked, but a common path caused it to crash.  Approximately 2 minutes after I started coding on it after the review the bug was fixed. 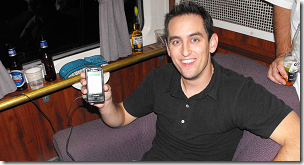 After the review I let Nikita do most of the work and apply his UI magic to the app and give it some green text.  After all it was a “green” app right?  Then the final review, we shot 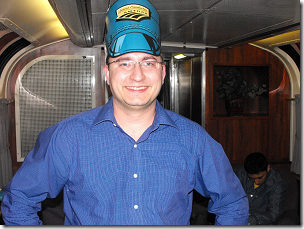 some more video and after dinner.

Next came the judging.  I think a great little “green-app” won the competition.  The winning  team built an application called “Un-Plug-It” that measured how much power was being used by the charger after the device was fully charged and still plugged in to the wall.  I’m pretty sure this application will do great with the “green-crowd” and they will sell lots of copies.

Overall this was an excellent experience that I would do again without question.  I can’t thank the AT&T Developer Program and Windows Phone enough for this experience. 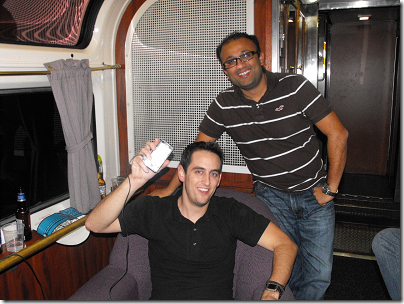 The Winning Team - Mitch Todd, Guarav Patel.  They built an awesome little app to display wasted power from the charger after the device has been charged. 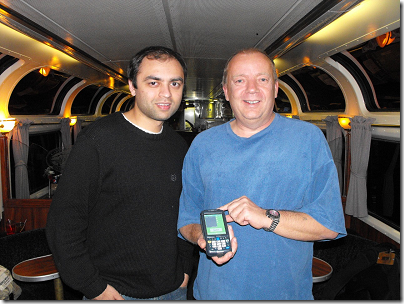 Mel Sampet and Ronald van der Putten – Built a little app to take pictures of stuff, label as “green or not” and upload the files.  An added bonus of this application was a subtle picture of algore. 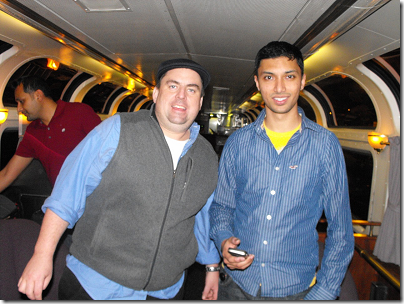 William Ryan and Rohan Singh – Built a cool little application that would allow you to identify locations as either Green or Not Green and upload that to a service for other people to find the greenest places out there. 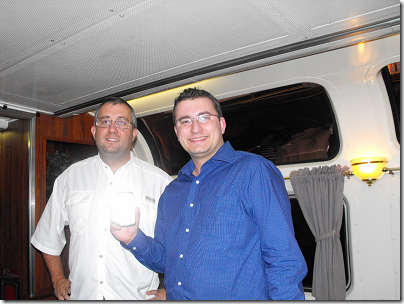 You host (on the Left) and partner Nikita Polyakov.  We built the Share-A-Ride app, coming soon to a Windows Phone near you! 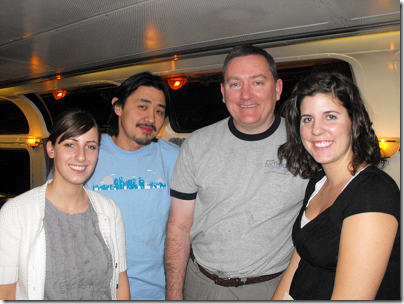 The two people that did most of the event coordination, made sure we were comfortable and always made sure our drinks never ran out escaped getting their pictures taken.  If anyone has any pictures I’ll make sure to update this post.  The *shy* people in mention were Ike Kehal and Bhalinder Kehal.

I have to give credit where credit is due, the pictures in this post where taken by Nikita Polyakov and Ronald van der Putten.