To the two out of three subscribers that read my blog for technical content, it’s safe to move along now.  This post is about my first Triathlon.

Hi honey – thanks for continuing on.

This last weekend, July 18, 2009 I completed my first Triathlon in Englewood FL.  This was a “short” event with a 400 meter swim, a 14 mile bike ride and a 5K run.  All I can say about the outcome is I finished it and didn’t finish in absolute last place overall or even in my age group.  Second to last in my age group.  I was “encouraged” to complete in the event at a user group meeting by @ryan_dorrell.

I’ve been running for the past 5 years, but never did anything real biking or swimming.  About one month ago I started training on my “mountain bike” I purchased at Target 10 years ago for about $150.  I was on Fort Myers Beach and started doing a little biking.  Cool I had thought, at high noon I could do 10 miles in just under 1 hour.  Awesome, with that pace I knew I could finish in the two hours that were allocated to complete the event.   Then I made the mistake of looking at the times for last year, people were doing the 14 miles in a little over 30 minutes.  WHAT THE HELL DID I GET MYSELF INTO!  I decided to get serious.  I upgraded to my wife’s hybrid bike that was a bit higher quality but still wasn’t built for speed and the tires weren’t quite as knobby.  I brought my time for a 14 mile ride down a bit.

I’ve been running for a while so I wasn’t too worried about that part.  Next it was time to introduce the swimming component.  At our place in Hudson, FL we have a pretty decent size channel, about two weeks ago I decided I should probably make sure I wouldn’t sink if I jumped in the ocean.  I didn’t.  I probably got about a dozen 500M swims in channel.  The first few went OK, but after those initial pathetic laps, my 6 years of high-school swimming came back to me and I think my muscle memory kicked in.  I knew I wouldn’t win in the swimming portion, but I knew I wouldn’t embarrass myself either.

So enough training leading up to the big event, time to compete.  First let me say if you haven’t been to Englewood FL, I was very impressed.  It’s worth your time. We travelled down there the day before and saw signs saying welcome athletes and good luck athletes.  Uh-oh, there are going to be athletes’ competing here?  I’m in trouble.  I’m not one of them.  Race morning, I got a good night sleep and woke up at 6AM.  I was setup and ready to go by 6:30.  No coffee, I found during training that wasn’t the right thing to do.  First thing I noticed was, ah, nobody else has a basket on the back of their bike.  Their bikes looked like the ones I saw at the bike store for $2.5K+, this probably isn’t going to be good.  Next thing I noticed was, oops, what are these things out in the ocean?  Waves?  I didn’t train for that, the channel I swam in was calm most of the time.  Oh well I guess I could deal with that, swimming felt pretty good. 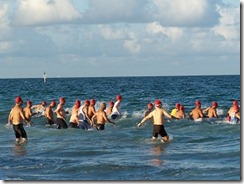 First wave off, 7:30AM.  All the young-ins (including @ryan_dorrell).  I sort of wish they would have started this at 6:30 it was starting to get HOT!  My wave (40+ years) was next at 7:33AM, here goes, time to show what I’m made of and jump in the ocean.  I figured with my training and endurance level I should probably start towards the back.  Actually I ended up bumping into and passing a number of people in the water.  I had practiced bilateral breathing, take a breath from one side doe a few strokes and then breath from the other, with the waves coming from my left side that didn’t work all that well.  When I came back on shore, I probably finished towards the top.  Time 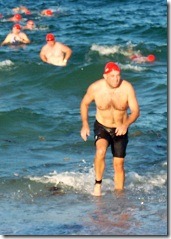 to transition between swimming and biking, all I can say is I probably need to work on that, I should be able to do it in about one and a half minutes.  This took me 3 minutes and 38 seconds, it really shouldn’t have taken me more than two.  Biking was nice, very scenic, flat and in the shade.  I think I passed exactly one person on the bike route, that person had an old rusty bike that I don’t think even had a gear shifter.  So I guess my bike wasn’t that absolute cheapest one out there.  It was fun to see all the people cruising by me, real athletes'.  I came to the half way point, 6.5 miles on my GPS, no problem 1/2 way there, I can do this.  After another 23 minutes and I came across the finish.  I don’t think the course was measured properly my little GPS told me it was only 13 miles.  That was certainly fine with me.  The transition between biking to running was much better, I was running within about  45 seconds after completing the biking phase.  Now it was really starting to get hot, about 95% of the run was in the hot Florida sun, but I was committed (or at least should be).  A little over 6 minutes into my run I got to the one mile marker and was handed some water.  My GPS said 0.75 miles, what the heck? Maybe this won’t be all bad.  I was wrong, the run seemed to 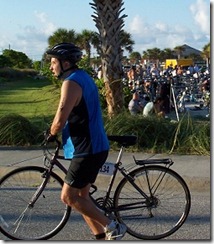 take forever and it just got hotter and hotter.  According to my GPS, I was running at a 9 minute and 30 second pace.  When trained I usually tried to run at about a 8:15ish mile and  competed in races with a 7:15-7:30 pace.  Sure the first two parts (swimming and running) took their toll but 9:30 was ridiculous.  Just too hot.  Unlike the biking portion I did pass a number of people, it seemed like everyone was struggling and many people were walking.  After about 30 minutes of running; that should have taken me about 24; I crossed the finish line.  Final time: 1 hour, 31 minutes and 33 seconds.  My goal was no more than 1:25 but was hoping for in the low 1:20’s.  I think for in the ways of comparison, the winning time was a l little over over one hour.  There were a number of people that finished after me.  I would suspect I finished in the top 2/3 of the total crowd. 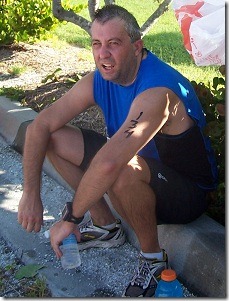 So what did I take away/learn from my experience?

Congratulations to all the athletes out there, maybe someday I’ll be honored to be recognized as part of your ranks.